Ahoy Pirates! We have had an exciting first month of 2020 for Pirate Chain. Highlights discussed in this update include, development on the Pirate Point-of-Sale system, mobile wallet update, partnerships news, conference participation plans, marketing strategy updates, exchange news, social media interviews and AMAs. Most immediately and importantly, the Pirate halvening is happening on February 27th! 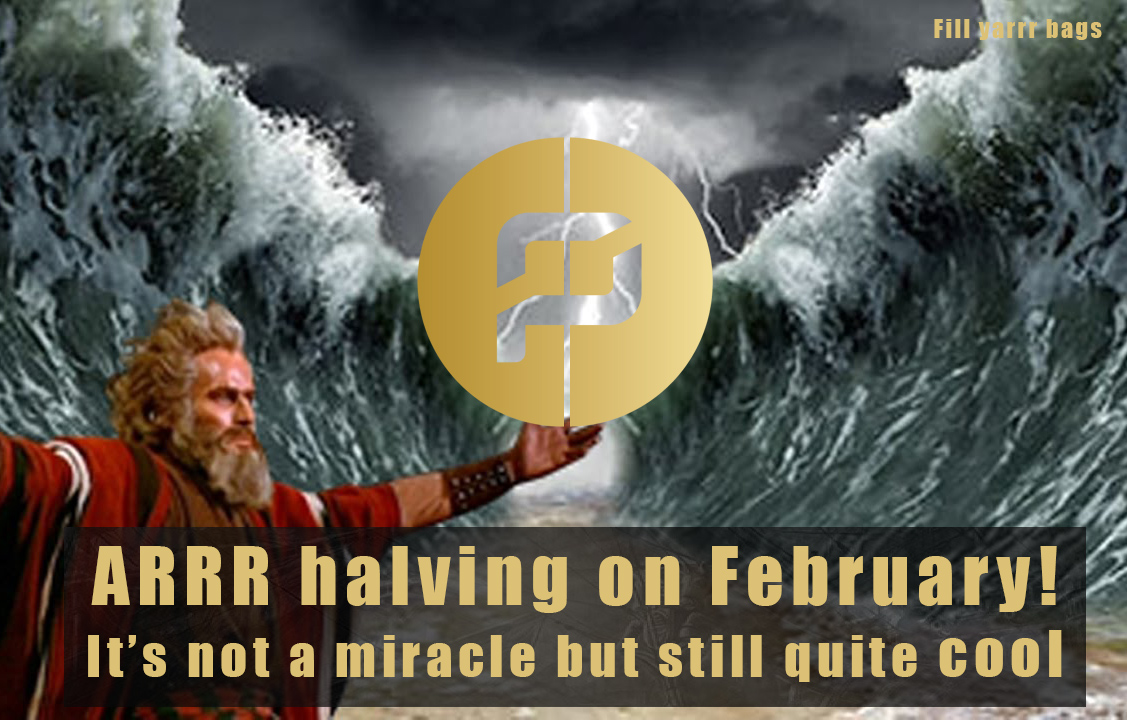 We are partnering with Sentinel! We will be able to not only pay for their dVPN services with ARRR, but they are building a special version for PirateOS! GhostShipOS and GalleonOS will not only run on the custom dVPN, users will also benefit from its other privacy features. Official announcement will be made at a later date! 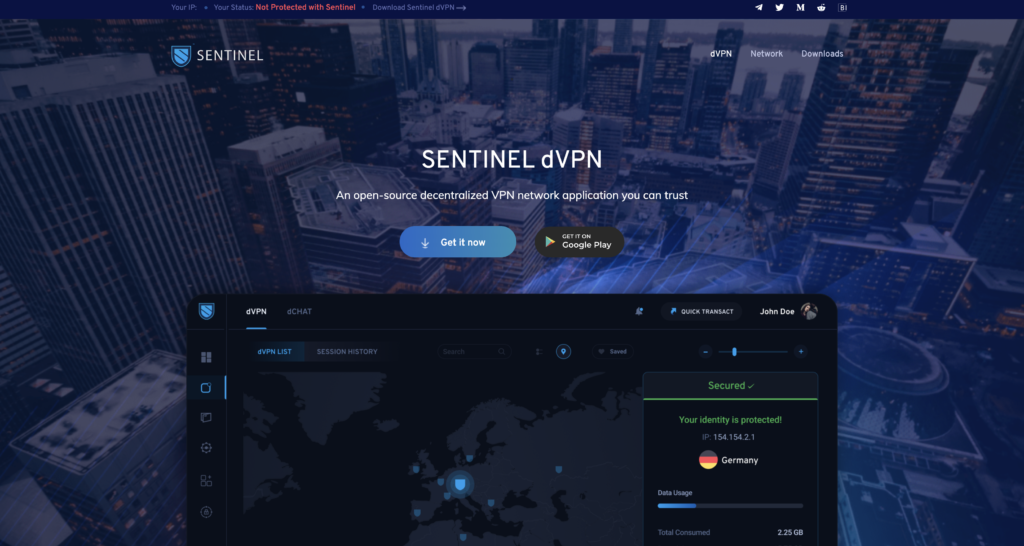 Work on the mobile wallet is starting shortly. Once coding for the wallet is done, we will gather community input for the graphics and recruit beta-testers.

Here’s a teaser of the graphic UI that’s being worked on!

Thanks to Wolf of Turtle Network, we have hired a dedicated developer to start developing the Pirate point-of-sale system. Pirate PoS will enable brick & mortar sales while significantly expanding online merchant adoption!

The Roadmap on the website has been updated! We have a massive list of things we plan on accomplishing this year, and so far we have an even bigger head start than we thought!! 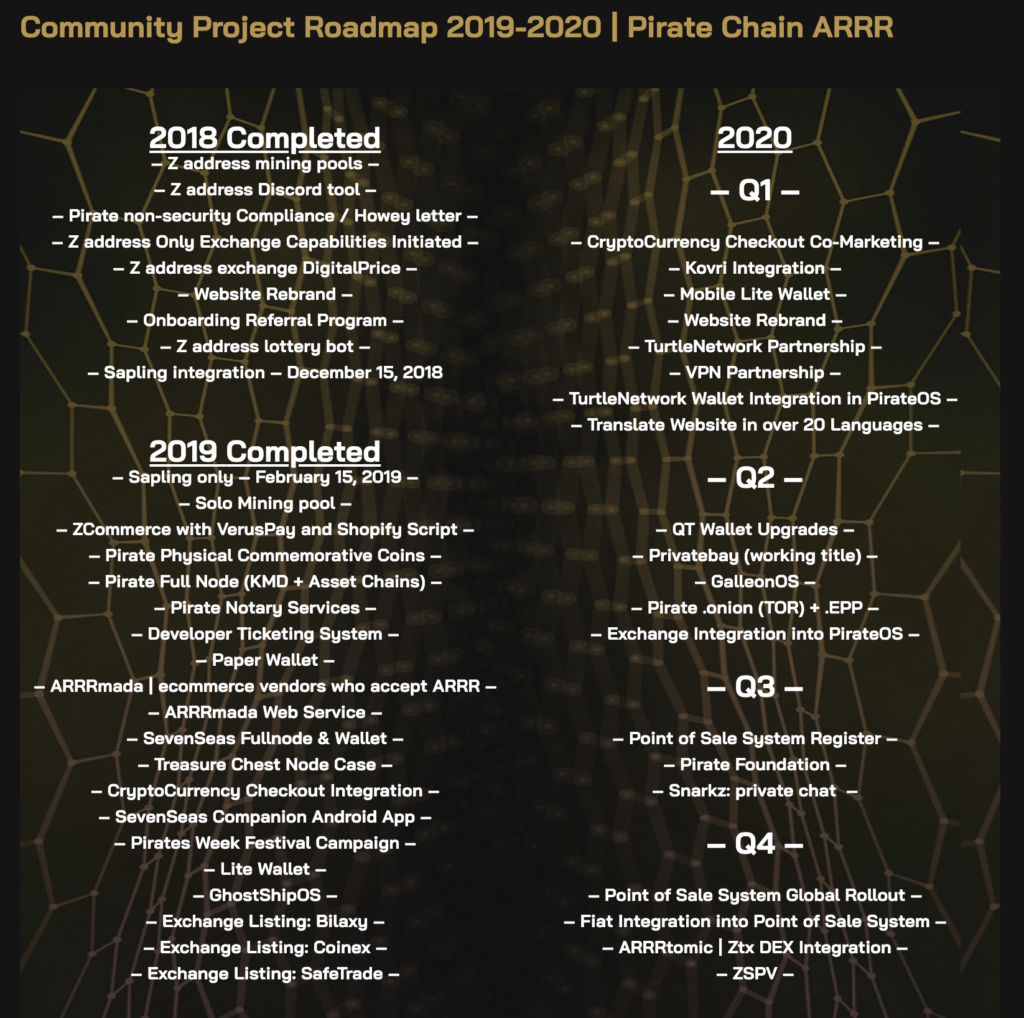 Pirate Chain’s marketing team has an exciting schedule of bounties, publications, giveaways, halvening afterparty upcoming in anticipation for the halvening, the launch of GhostShipOS, followed by GalleonOS. Look out on our discord for upcoming events!

Captain Draeth will have a major announcement upcoming on February 12th! The weekly Pirate Meeting on Wednesday February 12th will be held at a special time of 4pm est to talk about this exciting announcement! This major development will significantly advance the role Pirate in the blockchain and fintech industry! 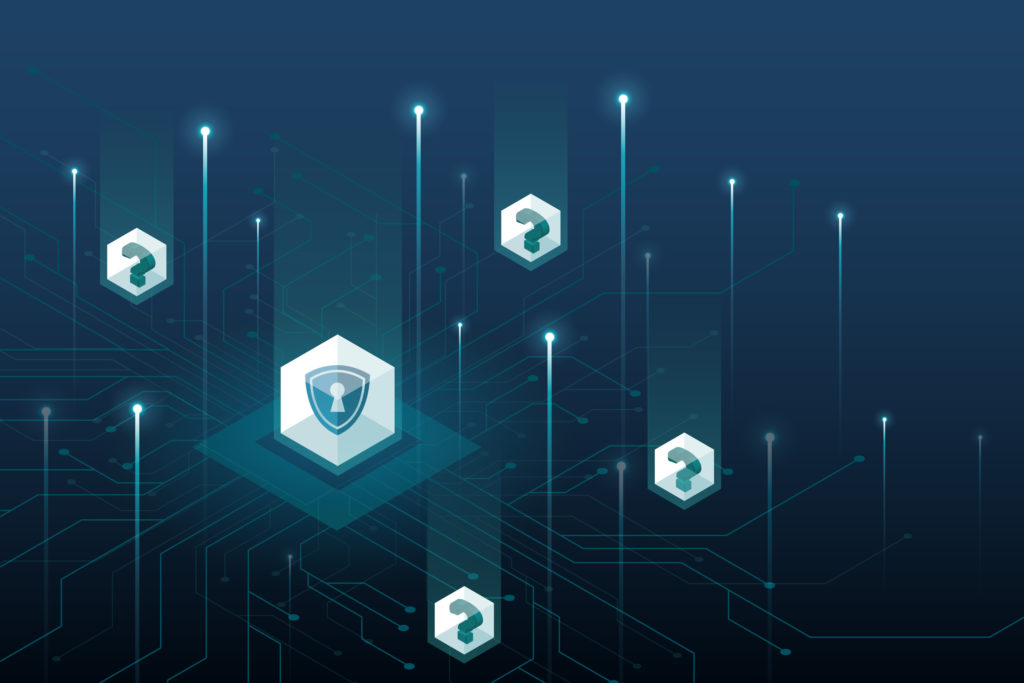 Pirate Chain is planning to sponsor CoinFestUK 2020! This is the 5th CoinFestUK conference. The event will host international exhibitors showcasing new and established projects.

There will be a wide range of topics covered with speaker presentations, workshops, crypto art gallery, Bitcoin lightning bar, a crypto panel session covering topics on cryto adoption, the future of crypto and a Q&A with the audience. Fun events include a crypto treasure hunt (hidden private keys throughout the CoinFestUK 2020 Venue), a B2B VIP Party and Trading Corner.

This is an invaluable opportunity to raise awareness about Privacy and Pirate Chain. Pirate crew members (CryptoRich and DreamTim) will be representing the project. We are raising 0.35btc for the event (0.3 BTC for sponsorship + 0.05btc for expenses). Sponsorship will grant us the following,

Please donate to help fund this, as this would help put us on a big stage! If there happens to be more donations than needed, all excess funds will go towards marketing 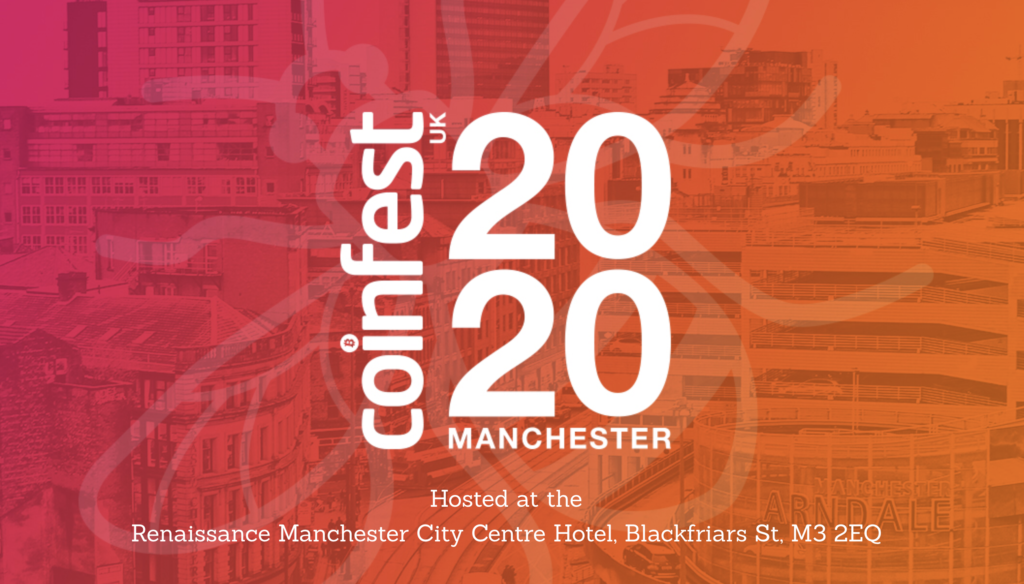 The meeting will be held in Manchester UK from April 3rd to 5th and free to attend, if you are available, grab your tickets here, https://coinfestuk.org/CFUK20/

Captain Draeth will be attending Consensus 2020, together with Lootz, Wolf and Cryptofist.

“Consensus is deemed as the premier event for blockchain industry. Intersecting the worlds of legacy finance and commerce, Consensus has proven to be the annual ‘state of the industry’ event, providing an introspective look at the previous 12 months and paving the way forward for the next 12.” 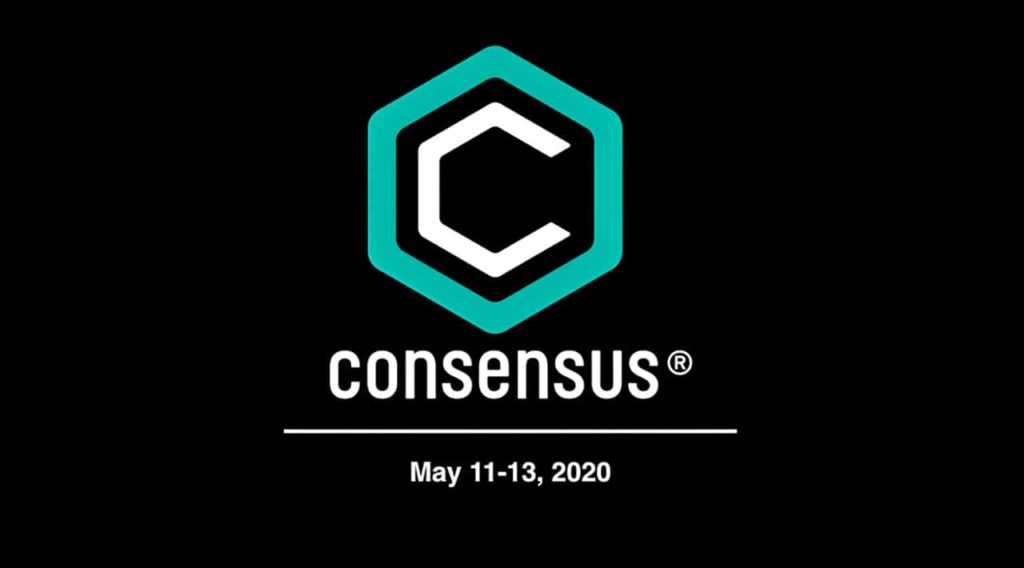 Plans for Pirates Week Festival 2020 in the Grand Cayman Islands have already begun!

“Pirates Week 2020 will start in Cayman Brac on Friday 30th October, move on to Grand Cayman on Thursday, 5th November and finish up Sunday 15th November in Little Cayman and will be another 16 fun-filled days of mock ‘pirate invasions’ and celebration of our culture and heritage!

Spectators will also enjoy a series of parades, fireworks displays, street dances, costume contests, sporting competitions, a celebration of traditional foods, music and much more, stretching across all three islands.”

The crew from last year will be in attendance again and this time, with significantly stronger presence on the island! The Pirate point-of-sale system will be introduced to the entire island. The team plans to integrate adoption of Pirate PoS with local banks and governments for an island-wide merchant adoption. Talks with the Pirates Week Festival are also planned for potential adoption of $ARRR as the official currency of the festival! Lots of exciting plans ahead!

ARRR trading is open on Safetrade!

If you are going to trade on Safetrade, but don’t have an account yet, consider using Pirate Chain’s referral link, all proceeds goes to Pirate’s marketing and development fund: 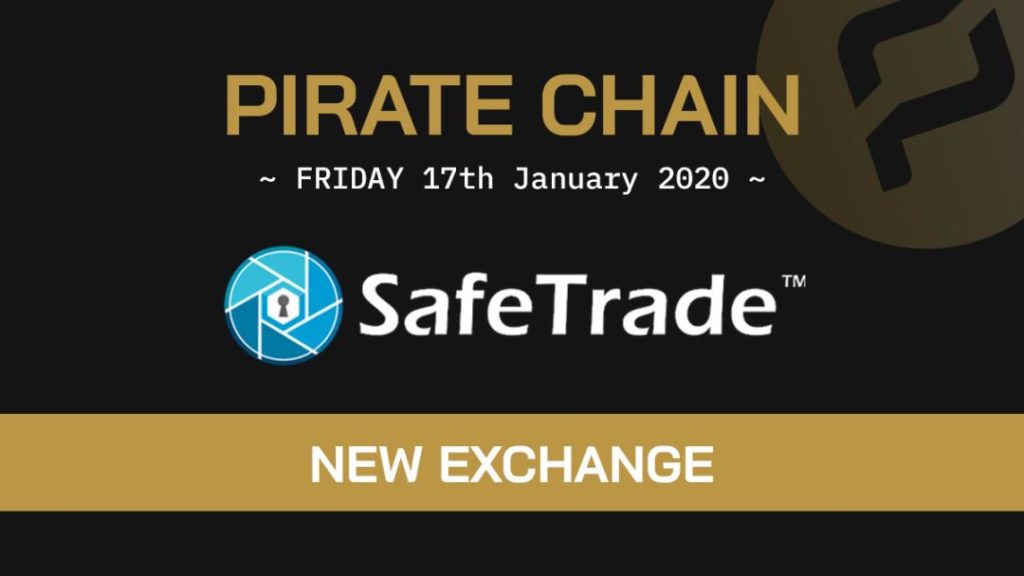 Pirate is in 1st place in the community voted coin listing for Mercatox!

Captain Draeth talks about how he first learned about Pirate Chain and the history of Pirate Chain’s humble beginnings, with a fair launch. Captain Draeth explains the need for community funding as there is no mining tax and discusses Pirate’s marketing strategy. The chat also discusses the theft of personal financial choices by major corporations to datamine from their consumers. The discussion also explores how all addresses on public blockchains can be linked to back to you.

On January 25th, Crypto Rich hosted an exciting interview with Captain Draeth about upcoming exciting events for Pirate Chain, including a teaser about the Pirate Point-of-Sale system.

Captain Draeth held a Ask-Me-Anything AMA session with Game of Bitcoins. On this AMA Captain Draeth talks about how Pirate’s state-of-the-art privacy technology sets itself as the best privacy coin in the blockchain industry. He also covers the strength of Pirate Chain’s security with delayed-Proof of Work. The AMA also discusses the dynamism and enthusiasm of the Pirate community, upcoming developments and the current state of privacy in the world. Check out the AMA recap here, 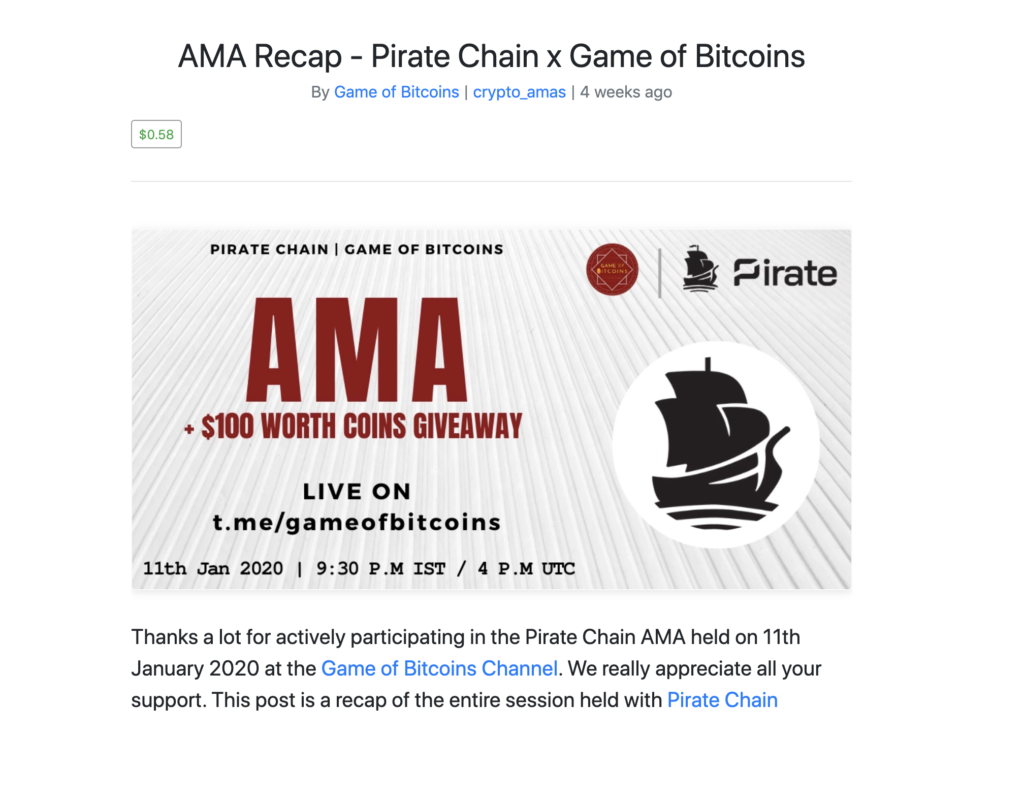 AMA with ComputerGenie on Mining

In this interview, Pirate’s First Mate ComputerGenie talks about mining, frequent mistakes by newcomers to mining and the effect of the upcoming Pirate mining rewards halving on the market. Check out the AMA recap here, https://pirate.black/mining-arrr-with-a-computer-genius/ 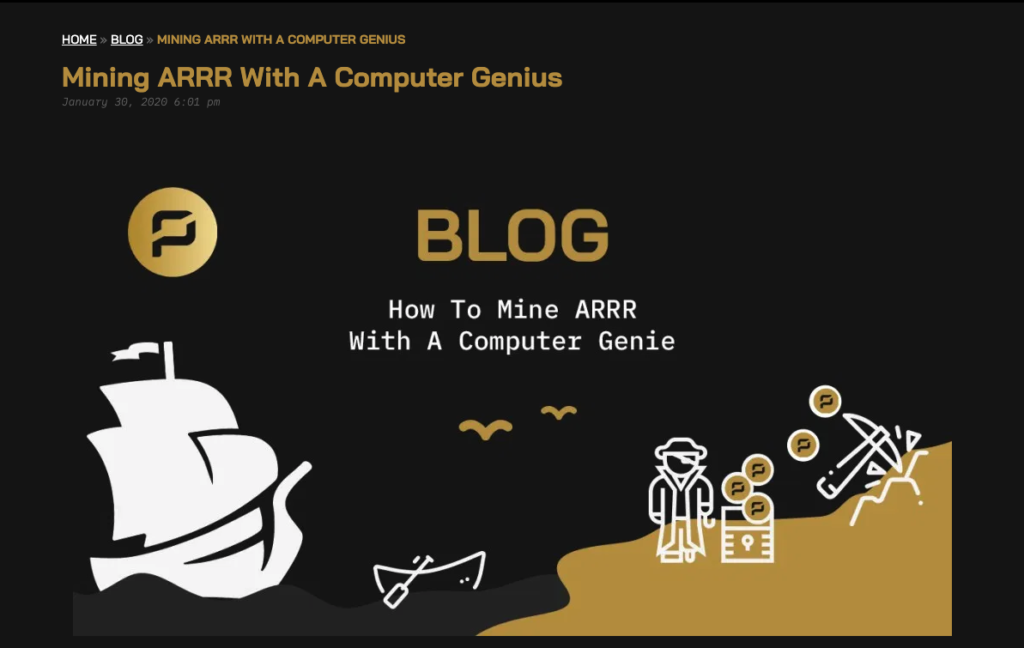 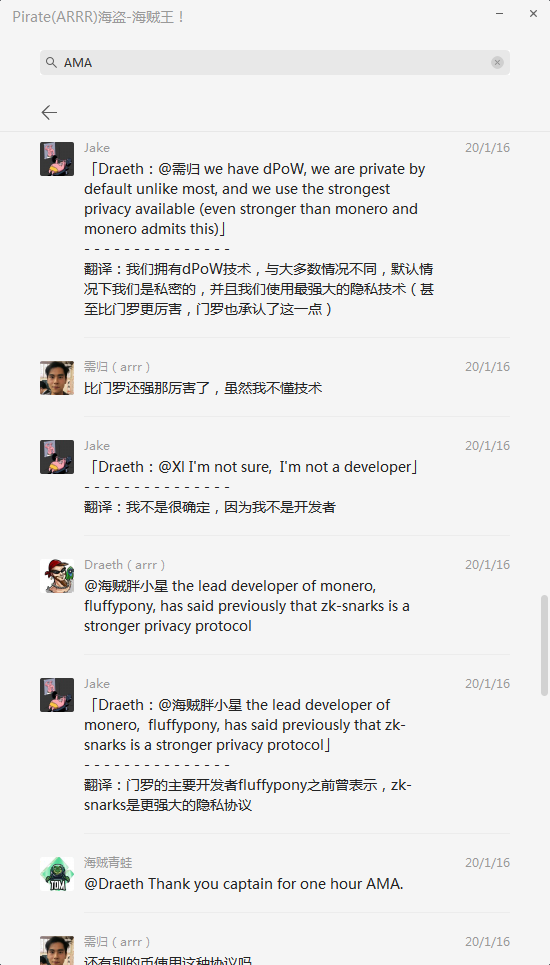 Pirate is halving in 17 days! Block mining rewards will go down to 64ARR per block. Follow the count down here, https://w2.countingdownto.com/2829831

Last words from the editor:

As the leading cryptocurrency with the best privacy, Pirate is the closest approximation to the US dollar in terms of anonymity and also boasts the sound fiscal policy of Bitcoin with programmed scarcity.
While other cryptocurrencies are awaiting development, second layer solutions for the fintech space are being built on Pirate Chain. (First person to ping me @wookie in the #pirate-chat channel on discord with the phrase “Pirate is anonymous like cash” will receive a reward****reward claimed by @P3L3****) In fact, there are several iterations of point-of-sale systems built on BTC, but BTC transactions are transparent and publicly reveal each user’s activity. Pirate is developing a point-of-sale system for the real world, akin to Venmo and Paypal. Both of these are household names for virtual payments. However, they are centralized systems with permanent records of every user’s transactions and they are built on the failing fiat system plaqued with perpetiual inflation. Worse, did you know that the default mode for Venmo is to publicly display every transaction of yours to all users of the app?